Some crises come with plenty of advance warning.

The executives came to the June meeting armed with a list of potential fixes: temporary visas to recruit overseas HGV drivers; action to clear the Covid-19 driving test backlog; extended driver hours; and a campaign by the government to urge retired British HGV-licence holders to get back behind the wheel.

But junior transport minister Lady Charlotte Vere was reluctant to act, according to two people present at the meeting. Instead she told the executives that there was “a perception that the industry is crying wolf” and that the government did not want to “create panic”.

The department denied at the time it was being complacent, but it was not until Monday – some 73 days after that June 16 meeting — that ministers finally agreed to all of the industry’s requests. Some 10,500 temporary visas have been issued to drivers and poultry workers, and Vere herself has signed a letter sent to a million HGV drivers this week begging them to get back on the road.

As the ruling Conservative party prepares to open its annual conference in Manchester this weekend, the growing litany of shortages means that Boris Johnson arrives in Manchester dogged by an air of crisis.

The party had hoped this conference would mark the return of “politics as normal” after the chaos of Brexit and Covid-19, giving Johnson a chance to set out his domestic agenda for the second half of this parliament.

But the prime minister will have to cut through the noise created not just by domestic supply-chain issues, but the gas crisis that led to another three small suppliers failing this week. And, lurking in the background, there is the threat that Covid-19, when combined with a bad outbreak of seasonal flu, still has the potential to tip the NHS over the edge.

Fears of a cost-of-living crisis have also grown, with the ending next week of “temporary” Covid support for poorer households — a £20-a-week universal credit uplift will be withdrawn — inflation heading towards 4 per cent, the end of the furlough scheme, and tax and energy price rises looming in the spring. Economists have speculated on the possible return of “stagflation”, with supply shocks stunting growth as prices rise.

One Tory MP, David Morris, warned of a new “winter of discontent” — the period of strife that accompanied the demise of James Callaghan’s Labour government in the late 1970s.

“I can remember the winter of discontent and I remember what was building up to it and this — to me — feels very, very reminiscent,” he told the BBC.

Industry is already warning that the government’s measures this week are “too little, too late” to avoid months of further chaos and Christmas disruption. Lady Ruby McGregor-Smith, the president of the British Chambers of Commerce, described the government’s visa package as “the equivalent of throwing a thimble of water on a bonfire”.

Even the government’s announcement about visas this week showed it is focused as much on ensuring supplies of turkeys and geese for Christmas dinner as it is on the stresses on the economy as a whole.

Retailers Next and Amazon, and the big supermarkets Tesco and Iceland are among the major brands that are warning customers of potential delays ahead of the biggest retail events of the year — Black Friday, Cyber Monday and the run-up to Christmas itself.

The National Pig Association warned this week of mass animal culls if butchers were not added to the visa programme.

“The irony is they could have done all this quietly and no one would have been any the wiser,” says James Bielby, chief executive of the Federation of Wholesale Distributors, whose members collectively represent £30bn in turnover and was present at the June 16 meeting.

“Instead they just doubled down on Brexit and said ‘find the solution yourself’.”

Still, ministers remain optimistic that the supply shocks are temporary and that inflation will quickly pass through the system. Rising wages and a buoyant labour market are seen in the Treasury as better insulators against a cold economic winter than more welfare.

While Johnson conceded a temporary easing of migration rules until Christmas for 5,000 extra lorry drivers, ministers still suspect some employers want to use the crisis to revert to a cheap supply of overseas drivers rather than train their own workers. 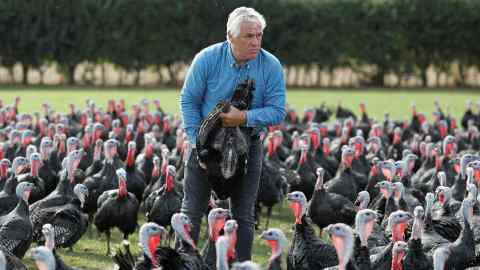 “I don’t think there will be much risk at Christmas time,” says one member of the Johnson administration. “There’s a transition period which we are experiencing. The low-skill, low-wage, high-immigration model was essentially voted out in the Brexit vote.”

Industry is nothing like so sanguine. Logistics experts say complacency in Whitehall among both politicians and officials is built around a basic failure to understand how ingrained the problems are, and how long it will take to fix them.

Shipping rates from Asia to the UK are now 14 times pre-pandemic levels, at $18,000 per container, according to industry analysts S&P Global Platts, while transit times have doubled from 35 to 70 days, causing companies to ship earlier, creating yet further pressure on the system.

Many inland warehouses and distribution centres are already full, causing backlogs at British ports that are also full to the point of overflowing, according to Alan Williams, director of Davies Turner, one of the UK’s largest independent freight forwarders.

“Shipping lines are asking for three weeks’ notice to collect a container, and major ports are just close to full capacity. I wouldn’t be surprised if the ports come to a standstill,” he says

The government’s offer of 10,500 visas for drivers and poultry workers will not bring relief in time for many Christmas supply chains which begin to ramp up next month, according to industry associations.

Richard Griffiths, chief executive of the British Poultry Council, says it was not clear whether even turkey supplies could be protected. “You can’t apply for a visa until October 15. It then takes three to four weeks to process in a best-case scenario, but the build-up for Christmas needs to start in early November. There is a feeling across producers that it’s ‘too little, too late’ and this should have been done six months ago,” he says.

Richard Burnett, head of the Road Haulage Association, is equally pessimistic about the short-term impact of issuing 5,000 HGV driver visas, even if in the medium term higher wages and clearing a backlog of tests estimated at 45,000 in June should ease problems by the middle of next year.

“Christmas doesn’t just happen. It takes a huge amount of planning and we can’t even sustain normal delivery volumes at the moment. The build-up starts now, but at the pre-Christmas peak you could expect to push out three times normal volumes,” he says.

David Jinks, the head of consumer research at ParcelHero, an express delivery company, says the UK’s supply-chain was now “riddled” with holes. “Unless the government makes the package to EU drivers vastly more attractive, Christmas shortages are now a certainty.”

The danger for Johnson — as Andrew Woolfenden, Tesco’s head of UK distribution warned this week — is that when customers see shortages on the shelves that will trigger a wave of pre-Christmas panic-buying of the kind that emptied the nation’s petrol pumps this week.

Johnson, a leader with a reputation for being a lucky general, will need to keep his fingers crossed this winter that two other potential problems — Covid-19 and a critical gas shortage — do not compound his woes.

Although the vaccine rollout has contained Covid-19 to manageable levels, with hospital admissions now at 700 a day compared to more than 4,500 per day at the peak of this January’s crisis, the NHS may still come under renewed pressure.

Threat of a Covid-19 resurgence over the Christmas party season, combined with other seasonal viruses such as flu and other respiratory tract viruses, could yet force Johnson to consider reintroducing some restrictions.

“You can’t underestimate the burden on the health service,” Professor Graham Medley, an epidemiologist who advises the government’s Scientific Advisory Group for Emergencies (Sage), tells the FT. “Even if the peak is not the same magnitude as last winter, the government may still decide it’s untenable and reintroduce restrictions.”

Even more pressing is the threat of a severe winter gas shortage caused by the combination of declining production in Europe and lower gas imports from Russia, depleted EU storage facilities which are running 17 per cent below five-year averages, and prices that are five times the three-year average, according to S&P Global Platts.

Kwasi Kwarteng, the business secretary, has already had to reassure MPs that there is “no question of lights going out”, but a cold snap this winter will be enough to create serious problems, according to James Huckstepp, head of Emea Gas Analytics.

Despite all the concerns of people that Johnson would no doubt call the “doomsters”, the prime minister’s team insist he will not be deflected in Manchester from his task of setting out his “levelling up” plan for deprived parts of the country — ignoring Labour leader Sir Keir Starmer’s jibe at his own conference: “Level up? You can’t even fill up.”

But while Johnson may be determined to plough on, Alastair Campbell, Tony Blair’s media chief at the time of Britain’s last fuel crisis in 2001, says the danger for Johnson is that his agenda is simply overwhelmed by a series of rolling crises through the autumn, with different sectors including care homes and hospitality facing staff shortages and supply chain disruption across the board.

“There’s been no grip at all,” he says. “The public are willing to give the government a large amount of leeway, but only provided they think the government is trying to get to the right place.”

The FT has revamped Trade Secrets, its must-read daily briefing on the changing face of international trade and globalisation.

Sign up here to understand which countries, companies and technologies are shaping the new global economy.