A dramatic video filmed in the southwestern city of Kunming in August hints at the scale of China’s property bubble. Onlookers can be heard screaming in awe as 15 high-rise apartment blocks are demolished by 85,000 controlled explosions in less than a minute.

The unfinished buildings, which formed a complex called Sunshine City II, had stood empty since 2013 after one developer ran out of money and another found defects in the construction work. “This urban scar that stood for nearly 10 years has at last taken a key step toward restoration,” said an article in the official Kunming Daily after the demolition.

Such “urban scars” are common all over China, where Evergrande — the world’s most heavily indebted property company — is suffering a liquidity crunch that could prove terminal. The crisis at the company, which as recently as two years ago ranked as the world’s most valuable property stock, highlights both the speed at which corporate fortunes can unravel and the deep flaws in China’s growth model.

Evergrande, for all of the high drama of its meltdown, is merely the symptom of a much bigger problem. China’s vast real estate sector, which contributes 29 per cent of the country’s gross domestic product, is so overbuilt that it threatens to relinquish its longstanding role as a prime driver of Chinese economic growth and, instead, become a drag on it.

There is enough empty property in China to house over 90m people, says Logan Wright, a Hong Kong-based director at Rhodium Group, a consultancy. To put that into perspective: there are 5 G7 countries — France, Germany, Italy, the UK and Canada — who could fit their entire populations into those empty Chinese apartments with room to spare.

“We estimate existing but unsold housing inventory is in the range of 3bn square metres, which is enough to house 30m families, conservatively,” Wright says, explaining his calculations. The average size of a household in China is just over three people, giving enough space for over 90m people.

Oversupply has been a problem for several years. What changed is that last year China decided the issue had become so chronic that it needed to firmly address it. President Xi Jinping had also run out of patience with the excesses of the property sector, say observers, and Beijing formulated “three red lines” to reduce debt levels in the sector. Evergrande is proving to be the first big victim.

As the company falters, its undoing raises a fundamental question for the world’s second-largest economy: has China’s property-driven growth model — the global economy’s most powerful locomotive — run out of road?

Yes, says Leland Miller, chief executive of China Beige Book, a consultancy which analyses the economy through proprietary data. “The leadership in Beijing has been more worried about Chinese growth than anyone in the west.

“There is a recognition that the old build, build, build playbook does not work any more and that it is actually getting dangerous. The leadership now appears to be thinking that it can’t wait any longer to change the growth model,” Miller says.

Ting Lu, chief China economist at investment bank Nomura, says he does not expect Evergrande’s woes to trigger an economic collapse. But he believes Beijing’s attempts to transition from one growth model to another could significantly depress annual growth in coming years.

Wright says the property sector is becoming a threat to financial, economic and social stability — it has already sparked protests in several cities. “It is very difficult to provide a compelling narrative that China’s potential growth will exceed 4 per cent in the next decade,” Wright adds.

Miller echoes that sentiment. “We are set for a roller-coaster ride in policy and in economic growth,” he says “I would not be surprised if a decade from now GDP growth was 1 or 2 per cent.”

If such projections prove correct, the Chinese growth “miracle” is in peril. In the decade from 2000 to 2009, China’s GDP growth averaged 10.4 per cent a year. This stellar performance abated during the decade from 2010 to 2019, but annual GDP still grew by an average of 7.68 per cent.

Any fall in growth would be swiftly felt worldwide. China has long been the biggest engine of global prosperity, contributing 28 per cent of GDP worldwide from 2013 to 2018 — more than twice the share of the US — according to a study by the IMF.

“Even if China avoids a sharp and sudden crisis,” says Jonas Goltermann at Capital Economics, a research firm, “its medium-term prospects are much worse than generally acknowledged.”

The risks that spring from the Evergrande saga encompass both financial contagion — especially in the offshore US dollar bond market — and the prospect that a flagging property sector will strike at some of the vital organs of the Chinese economy, potentially depressing GDP growth for years to come.

The fallout from the crisis is already considerable. Evergrande’s plummeting share price has slashed the company’s market capitalisation from $320bn last year to about $3.7bn now. And concerns around its possible collapse triggered a global markets sell-off this week. Some 80,000 people in China who hold about $40bn in the company’s wealth management products are waiting nervously to see whether Evergrande will honour payment obligations. Offshore bondholders are bracing for a default, perhaps as early as Thursday, with one bond due to pay interest trading at about 30 per cent of its face value.

But potentially longer lasting impacts derive from the broader fall in China’s property market. It is clear that the real estate sector is in a tailspin, with sales in 52 large cities down 16 per cent in the first half of September year on year, extending a 20 per cent decline in August, according to official data.

An even more consequential trend for China’s political economy is the collapse in land sales by local governments, which fell 90 per cent year on year in the first 12 days of September, official figures show. Such land sales generate about one-third of local government revenues, which in turn are used to help pay the principal and interest on some $8.4tn in debt issued by several thousand local government financing vehicles. LGFVs act as an often unseen dynamo for the broader economy; they raise capital through bond issuance that is then used to fund vast infrastructure projects.

“We expect land sales revenue to get much worse,” says Nomura’s Lu.

This dwindling ability of local governments to raise finance to spend on infrastructure has the potential to depress Chinese growth considerably. Fixed asset investment, which last year totalled Rmb51.9tn ($8tn), constitutes 43 per cent of GDP. 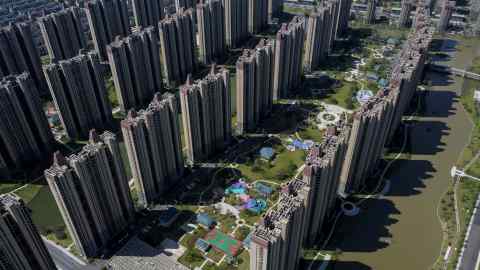 Yields of over 50 per cent suggest defaults are likely, he adds.

Ultimately, the fate of such bonds, and almost all other offshoots from the malaise in Chinese property, depends on Beijing. The Chinese state owns almost all of the country’s large financial institutions, meaning that if Beijing orders them to bail out Evergrande or other distressed property companies, they will follow orders.

In some overseas markets the idea that Evergrande’s distress may presage a “Lehman moment” — recalling the chaos that followed the collapse of US investment bank Lehman Brothers 13 years ago — has gained traction. But given Beijing’s influence and vested interests, the analogy does not easily fit.

“Unless China’s regulators seriously mismanage the situation, a systemic crisis in the country’s financial sector is not on the cards,” says He Wei, an analyst at Gavekal, a research company.

Indeed, the main cause of Evergrande’s crisis and the downturn in the broader property sector is Beijing itself. The “three red lines” that the Xi government announced last year stipulate that developers must keep debt levels within reasonable bounds.

If it is true that Beijing is the main cause of Evergrande’s predicament, then it stands to reason that it can end the current market meltdown by taking its foot off the property sector’s throat.

But deep structural forces in the economy have convinced China’s policymakers that property can no longer be a reliable dynamo for sustainable economic growth, analysts say. This is not only because of Xi’s famous phrase that “houses are for living in, not for speculation,” made in a 2017 speech.

For one thing, the demand picture has changed utterly from when Beijing pushed through free market reforms in the late 1990s that touched off the biggest real estate boom in human history.

China’s population is hardly growing. In 2020, only 12m babies were born, down from 14.65m a year earlier in a country of 1.4bn. The trend may well become more pronounced over the next decade as the number of women of peak childbearing age — between 22 to 35 — is due to fall by more than 30 per cent.

Some experts are predicting that the birth rate could drop below 10m a year, throwing China’s population into absolute decline and further dampening demand for property.

Houze Song, an analyst at Chicago-based think-tank MacroPolo, says the situation is exacerbated by the phenomenon of “shrinking cities”. After around three decades during which hundreds of millions of people left their rural villages to settle in cities, the biggest migration in human history has now dwindled to a trickle.

About three quarters of the cities in China are in population decline, says Song. “A decade from now, even assuming that some people will leave for growth cities, more than 600m Chinese citizens will still live in shrinking cities.”

China is faced with a risky transition. It is starting to shift its growth model away from an over-reliance on real estate to more preferred engines of growth such as high-tech manufacturing and the deployment of green technologies, analysts say.

Here again, the impetus comes from Xi. A list of eight priorities released following an economic planning meeting in late 2020 not only denounced the “disorderly expansion of capital” — understood to have been code for speculation in property — it also advocated technological innovation and the pursuit of carbon neutrality.

Such a transition may take several years to achieve, analysts say. But it is clear from Xi’s recent exhortations on the need for China to follow “common prosperity” that he is serious. The propensity of real estate to leapfrog in value in sought-after areas while remaining undercooked in low-rent districts has been blamed for widening the inequality gap between rich and poor.

“The slogan of ‘common prosperity’ is a narrative change that paves the way for a shift in the growth model,” says Miller. “It clarifies that a drop in GDP growth is not a failure for the Chinese Communist party.”

Yet, ordinary people across China are suffering the pain of the country’s property market meltdown. Xu, 36, who asked not to be fully identified, lives in the central city of Xinyang and works as a secretary at a local factory. Her mother bought a high-yield investment product from Evergrande to help cover the medical bills for her late-stage lung cancer.

But the promised 7.5 per cent returns from the investment, which cost Rmb200,000, have not materialised. Instead, Evergrande is refusing to pay out as it conserves cash to stave off potentially huge defaults.

“My parents have put all they have into Evergrande,” says Xu. “This is no longer just an economic issue,” she adds, “this is absolutely a huge social issue. There will be serious consequences if the issue doesn’t get properly solved.

“If my mother’s health situation deteriorates because of this,” adds Xu, “I am going to fight Evergrande every day.”