Creating unity and team spirit is an important part of any club preparation season, and it is no different from Brighton Women

The Seagulls are allowing sky-high cameras ahead of the summer this week in the first week of the Women’s Super League, a third of Sky Sports’s four-part series. Brighton: Through the Ground a series featuring a battalion against each other in coastal volleyball competitions.

The pre-season has grown significantly since Brighton became a full-time women’s apparel in the 2018 Women’s League.

“It’s great to see outsiders and just feel like you’re laughing with your friends – at the peak of the season and that’s where the struggle starts,” he said after winning a beach volleyball match.

“I spend a lot of time making sure my mind is in the right place. Before I became a full-time volunteer, I worked full-time as a PE specialist in a special needs school. I would not be here [where I am with Brighton]. “

Sky Sports News went behind the scenes in Brighton for the new WSL season, with transfer news and new players listed in the first episode of ‘Brighton: Beyond the Pitch’

The team faced a number of opportunities in the new campaign, which included a 6-1 defeat at Everton, before ending their season with a 1-1 draw against Manchester United.

Republic of Ireland midfielder Megan Connolly is finishing her second season as a Brighton player and admits their WSL preparations at home to West Ham on Sunday have been great.

“It’s been very difficult, but that’s what happens before the weather, to show you the hardest part, that the weather is coming [ready and] they can, “he says. 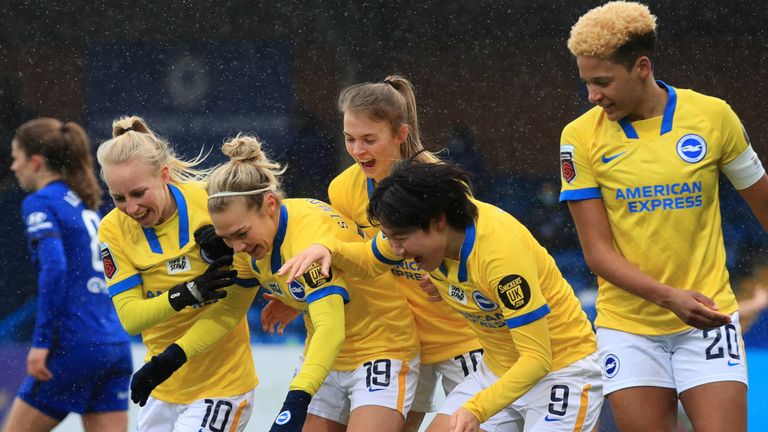 Victoria Williams and Emily Simpkins reflect on last season’s change and express their hopes for a new WSL campaign in the second installment of ‘Brighton: Beyond the Pitch’

“It’s not enough [in terms of performances and results] but, you know, that’s why you play games before the season. You can’t stop. You cannot remove the foot. You have to push. “

Assistant manager Amy Merricks knows what he wants from the players and hopes to impress West Ham when they go to Amex Stadium this week.

He says: “This is the stage, isn’t it? Every time they play, every time they are trained, they are there to play. Players at this level want to compete and be 100% the best at the moment – and if they don’t, then they can’t last.”

Sky Games has announced a three-year deal with the FA to become the chief broadcaster of the Barclays FA Women Super League from September 2021, becoming one of Sky Games initial contributions.

The alliance will see Sky Games show at least 35 games just sit on one season and encourage the broadcaster’s commitment to women’s sports.

Sky Games is recruiting the world’s top production and non-production team as part of organizing WSL and other major sporting events.

Click play on the video above to watch the third episode of ‘Brighton: Beyond the Pitch’, running on Sky platforms on Thursday